I Choose the Ladder

I CHOOSE THE LADDER

Watchen Nyanue is a business strategy leader from Liberia. Not only is she the founder of I Choose the Ladder, but she is also the Vice President of Marketing Partnership for the WNBA Chicago Sky. Additionally, she is the co-founder of Little Doebahyou, a monthly subscription box, which teaches children between the ages of 6-11 to embrace and understand the history and culture of the African Diaspora. Nyanue has been endowed with many accolades. She is a 2018 Chicago Business Journal Woman of Influence Honoree, a Chicago Scholars 35 Under 35 Honoree, and a Biz Women 2018 Headliner. She has also been featured on Windy City Live, WGN-TV and Chi at a Glance.

I Choose the Ladder is an empowering bi-weekly podcast that features uncensored stories of black women who have stepped up to the challenge and shattered the glass ceiling of corporate America. In these podcasts, black women not only share their experiences, but they also share advice on how to break barriers in various sectors.  Prior to launching I Choose the Ladder, Nyanue Watchen worked for Comedy Central, Hearst Digital, Yahoo! and the Johnson Publishing Company. 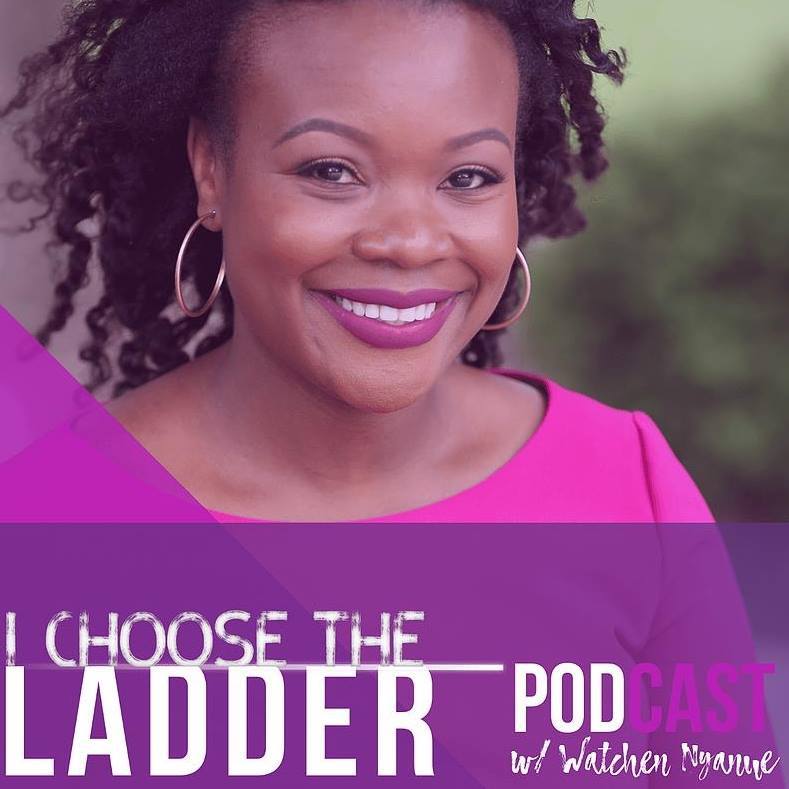 The I Choose the Ladder podcast has featured a wide range of guests from various spheres. From Nicole A. Elam, who is the Vice President of Government Relations at JPMORGAN CHASE & CO, to Shaelyn Otikor, who is the Senior Vice President of Global Business Strategy at Northern Trust Corporation. Here, I spoke to Nyanue about her interests, experiences, and the I Choose the Ladder podcast.

Kazembe: How did you come up with the brand name “I Choose The Ladder?” Is there a story behind that?

Nyanue: For me, the podcast and the program that we do is to make people feel empowered in their career choices. I want people who are in the corporate world to realize that they are choosing to climb the ladder and to feel like they are in total control.

Kazembe: What excites you the most about the I Choose the Ladder podcasts?

Nyanue: Part of it is getting to hear the stories of these phenomenal women whom most people have probably never heard of, but who are actually making a difference and changing the narrative for black women in corporate America. I think that there are some really fascinating stories about how they got to where they are. We had our first career summit last year and at the summit people got jobs, mentors, and internships, so to see the actual results of the work is also really exciting.

Kazembe: Is there a particular story that has stood out to you the most?

Nyanue: So, there are quite a few. One of them features Nzinga Shaw, who is the Chief Diversity Officer of Starbucks, but when I interviewed her she was the Chief Diversity Officer of the Atlanta Hawks. She was the first person to have the Chief Diversity Officer title in all of the professional sports. She actually got that because, at that time, she was working for another organization and she recognized the need for a position that focuses on diversity and inclusion. So she spent a couple of weeks doing research, putting together a proposal and she presented it to her boss. A lot of times your boss should be the person who is trying to help you within your career pathway, but when she presented the idea, her boss said, “I am not a Chief anything so what makes you think you are going to get it? You are never going to be a chief of anything”. Two years later to the date, she became the first person to have a Chief Diversity title in all of professional sports. Another story is Episode 19 which features Sherina May Edward. She is one of my favorites. She is a partner at a law firm. Most people work forever to try to lobby for the position. In her case, she was nominated by someone to get this position and she doesn’t even know who nominated her. Her message was that people are always watching so make sure that you are always doing your best. Another one is Episode 20 whereby Karen Brown talks about being raised in the equivalent of a small shack in Jamaica and then came to be the Chief Diversity Officer of a major corporation and now runs her own consulting firm.

Kazembe: Which listeners are you mainly targeting for your Podcast?

Nyanue: For us the intention is for people in their early career stages, not people in senior management. A lot of people who listen are mostly black women between the ages of 23 to 36, but we also have non-black women who also listen to the podcast. It also helps younger college women on campus with knowing what they need to do to start preparing for transitioning from full time students to working in the corporate world whereby the learning curve is not so steep.

Kazembe: Can you tell me about a project or accomplishment that you consider to have been the most significant in your career?

Nyanue: Outside of running I Choose the Ladder, I am the Senior Vice President of Marketing partnerships for the WNBA here in Chicago. Two years ago we partnered with our New Jersey partner and we found out that when Kevin Durant was playing for the Warriors he had the Guinness World Record for the world’s largest basketball lesson so we set out to beat his world record and that’s how we announced the partnership. We actually beat Kevin Durant’s record and we had about 25,000 people of all ages playing basketball at the same time and it was a lot of fun!

Kazembe: Can you tell me about a time you overcame a challenge?

Nyanue: If we are talking about now:  A recent challenge for me is the coronavirus pandemic. For sports it’s a big deal. The NBA paused their season and it’s the same for the WNBA right? And for us, we are trying to figure out a new normal. Our season normally starts on May 15th. So, for now, we have been trying to figure out how to keep things going and how to keep partners interested in us during this time when we are not playing…. when we normally would be playing. We also wanted to figure out how we can come back to play this season and ways to keep people engaged with the brand and the game.

Thinking back to the time when I was in college, I had done eight internships by the time I graduated. Post-graduation, I decided that I wanted to live in Los Angeles and New York. I had seen people on TV loading up their cars and moving to Los Angeles and that’s what I did. I literally moved to Los Angeles with my friend and I didn’t have a job. I also didn’t have a place to stay. And I said that I would figure it out; they do it on TV all the time, I got this. It was not as easy as I thought, but I was able to find a job on Craigslist. I thought that I was interviewing for a job to work for the gym, but it was actually for an acting school, and tons of friends that I know had really good business networks. It was tough figuring out how to support myself after college and figuring out how to have a clear sense of what I wanted to do professionally and figuring out how to network beyond my family in Chicago, halfway across the country from my parents. It really taught me that I am resilient and that my problem-solving skills are really up to par. That was a pretty tough time.

Kazembe: Who is the first corporate connection you made and what impact did they have on your life?

Nyanue: I went to undergrad on a scholarship from an organization called the Posse Foundation. The Posse Foundation is based in NY, so I remember reaching out to them, to their career center and telling them that I want to move to NY and I asked them if they have a connection to anyone who works in TV or entertainment and it just so happened that the president of Comedy Central was on the board at that time, so they set up a meeting with me and her. When I was meeting her she introduced me to this guy who was the head of marketing named Peter Risafi. Peter Risafi and I interviewed and I literally got the job the next day after meeting him. Peter was my first corporate mentor. He was the person through whom I learned to navigate my way in corporate America. I was his assistant and he was the person right at the top. He is the head of marketing in the entire network. He did such a good job of letting me know what I was expected to do, what the corporate America landscape was, and he helped me with professionalism. That was in 2007 and I still talk to him once a week and despite not having worked for him since 2012.

Kazembe: What resources have you used to leverage your corporate ladder climb?

Nyanue: I am huge on professional development. I take tons of coursework online and I also do workshops. I am currently getting my MBA at the University of Chicago. I leverage some of their resources. I read a lot of books. A book that I am reading about right now is Mindset. I am also into podcasts. I also rent books and audiobooks for free. I have also been able to grow a healthy network of people, and I reach out to those people when I have questions or need guidance.

Kazembe: What would you say are some of the main challenges that black women face in corporate America and what advice would you give them to overcome those challenges?

Nyanue: So, I feel like if you are first generation in corporate America, it is really hard to understand corporate culture and expectations unless you have someone to guide you. If you are first generation your parents often tell you to go to school, get good grades and get a job, but that’s not how it works. That’s a part of it, but there is a big portion that is left out of this statement. I don’t think black women are really told how important it is to have a network and how to leverage a network, so we go into the corporate world with a little less confidence because we don’t have the resources.

Kazembe: What general advice would you give to young women in college who are planning on launching their career pathway within the corporate world?

Nyanue: Most of the decisions in relation to your career will be made in the room when you are not there, so you have to make sure that you do things that will represent you when you are not in the room. And also, really spend time on cultivating a high-quality network. You can do that at school or with your teachers. Find people who you are interested in and nurture those relationships. My best friends are from undergrad and they are still a part of my life. I do business with them.

The I Choose the Ladder Podcast can be found on Apple, Spotify, and SoundCloud. For more information visit https://www.ichoosetheladder.com/