Political Youth: Is it time for youth to talk more about political engagement? 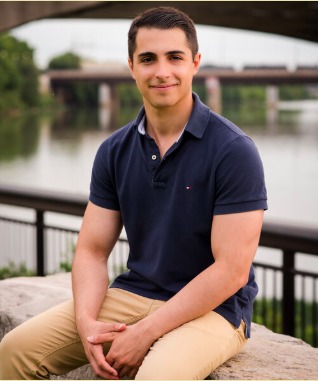 Is it time for youth to talk more about political engagement?

Daniel Di Martino recently graduated from Indiana University in the 2019 fall semester. He has been featured on various TV networks and radio stations including but not limited to; Fox News, CNN, Fox Business, and i24 News English. According to FOX59, he met with President Trump in 2019 to discuss political issues pertaining to Venezuela. He has used the media as a platform to raise more awareness about political issues that matter to him. Kazembe interviewed him to learn more about his interests and his political involvement.

Kazembe: What did you study at Indiana University?

Martino:I recently graduated from Indiana University. I studied economics. I also had three different minors. One was in mathematics, one was in political science and the other one in honors leadership.

Kazembe:Which organizations were you actively involved in on campus?

Kazembe:Who would you say is your biggest inspiration?

Martino:I would say my biggest inspirations are my grandparents from my mother’s side.

Kazembe:Is there any particular reason why your grandparents are your biggest inspirations?

Martino:My grandparents from my mother’s side of the family inspire me because of their story. They were born just before the Spanish Civil War. The war was devastating for Spain. My grandfather was left as an orphan after the Spanish Civil War. After the war my grandparents migrated to Venezuela on a boat by themselves at the age of 19 to build a life for themselves. Both of them did not have an elementary education. My grandmother started cleaning homes. My grandad started off by cleaning cars. After years of working hard they ended up buying their own garage. Then they started selling clothes. Then they managed to acquire their own building to do so and they started renting out apartments then my mother went to college. My dad’s side of the family has a similar story, the only difference is that they were from Italy. That’s why I can relate to them. I had to leave my own country at a similar age to get a better life. The only difference is that I was fortunate to have had a high school education. I wouldn’t have left Venezuela if it wasn’t because of the socialist government. Unfortunately, there was no future there for me or my family there. I would have stayed there but that was not a feasible option.

Martino: My goal in life is to ultimately end these terrible regimes that oppress so many people. The dictatorship regimes in countries such as Venezuela, Cuba, Nicaruaga and even North Korea. My aim is to bring freedom to all of those places.

Kazembe:What led to your passion for politics?

Martino:I was born in Maracay in Venezuela. I went to school with Raul who you know. He is one of the reasons why I am passionate about politics. I actually met him in preschool and he is one of my best friends. Whilst growing up in Venezuela, my family went from being well-off to not being so well-off. We were previously able to take vacations and we always had food on our plates. We didn’t worry about making ends meet. If you read my USA Today article you will see that my parents were making several thousand dollars a month in the early 2000s which was great at that time. We would have been considered a middle class family in America. Then we went to barely making 100 dollars a month or even 2 dollars a day. This change happened within the space of 15 years. There are many different reasons that resulted in changes to economic well-being to different people in Venezuela. In my family’s case it was because we privately owned a gas station that became subject to government control. The gas station was previously an extension of British Petroleum and we had a profit share agreement with them and it was great. However, the terms and conditions changed when the government nationalized our gas station. We couldn’t privately manage the gas station and set the price anymore. The government cut down the price of gasoline. The inflation was also high at that time. Gasoline was basically free, it cost less than a cent. The government had to pay us to keep on working.

Kazembe: What's one area or project that you have worked on to make a change?

Martino: Well I have worked on several projects. I would say the greatest one was working with Model United Nations. By the way, I first got involved with the Model United Nations when l was in 5th grade, thanks to Raul. I think that the Model United Nations (MUN) is great because it is educational. MUN teaches you about leadership, persuasion, diplomacy and the rest of the world. When l was in high school in Venezuela, I expanded MUN to public schools which I cooperated with. The main reason why I expanded it was because not many people had access to MUN. In College, I have used media exposure to make a change. I have written for newspapers and online outlets to raise more awareness about what is happening in Venezuela and to inform the international community about what steps they can take to free Venezuela from its current situation.

Kazembe: What inspired you to write for Young Voices?

Martino: When I did an internship program at the Manhattan Institute, one of the directors from Young Voices came as a speaker and he informed us about it. I saw Young Voices as an opportunity to express my political opinions and to raise more awareness about Venezuela. That’s what motivated me to apply to Young Voices. The people at Young Voices also saw potential in me and that has allowed me to make an impact.

Kazembe: Why do you think that young people should be involved in politics?

Martino: I think that everyone should be involved in politics and not just young people. Everyone should have a right to say what they think. I think that anybody with a strong informed opinion should make their voice heard. Everyone always talks about how young people should be involved in politics but I think the reason why some of them are not involved is because some of them don't care and that's a problem, they need to care. At the same time, I don't like how the left likes to co-opt issues of youth involvement in politics. I think people on the right, and those of us who are pro-liberty need to reach out to more young people.